Monsters vs Aliens: My Review of the 3D format 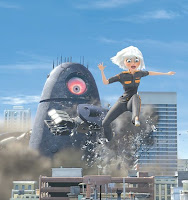 Roger Ebert panned Monsters vs. Aliens 3D in his review, spending more time complaining about the format than he did actually critiquing the story or dialogue. He sounded so old and stodgy that my inherent ageism began to kick in, so much so that I decided that I had to see this movie, just to spite Roger Ebert.

The 3D glasses we were given at the entrance were big and clunky. They were heavy on the bridge of my nose, and it’s a good thing I wasn’t wearing glasses, because that would have just been too much for my head to handle. The lenses were large enough to encompass all of my direct and peripheral vision, and once the movie started, I got used to the glasses very quickly.

In the past few decades, there have been movies that have not necessarily had the best story, but the effects have shown what the future of the motion picture industry could provide the audience. Some have become classics, others have been forgotten. Of those that are classics, perhaps the best example that took advantage of new technologies and made the audience go “Wow!” was Jurassic Park.

Do I consider MvA3D to be the next Jurassic Park? Yes and no. First of all, 3D is not a new format, and each time they try to reintroduce it, the results are predictable: gratuitous shots of things being literally thrown at the camera (Kiss me, Kate, anyone?), with more time being spent on selling the format than actually having a good time with it. Then there’s the requirement of having to wear equipment in order to enjoy the movie. It adds cost to an already-expensive outing, so it better be worth it.

But MvA3D worked. Once the movie started, I was sold on the 3D technology. The colors may have been a little muted (especially for a CG-animated film), but that was small potatoes to what was accomplished, which was to give the audience a sense of scale. That is a remarkable achievement, because the movie’s main character grows from normal height to just shy of 50 feet tall. The audience is never confused as to whose point of view we are looking from, and when the scenes transition into huge underground caverns that dwarf our 50-foot-tall heroine, we feel just as small as the normal-sized characters that are with her.

What helped immensely was that it was a pretty funny movie. Not to the level of The Incredibles, but just silly enough to cause quite a few laugh-out-loud moments. Fans of John Williams’ work will be especially appreciative when not one but two of his best known themes are used. There are musical cues that pay homage to Independence Day, and when you have “Axel F,” DDR, and Aqua in the same movie, it can’t be all bad. The voice acting was good, not great, which is a bit disappointing because some of today’s finest comedic actors provide their voices. But still, the movie was a lot of fun, and because of that, the potential to use 3D as a featured format becomes more and more feasible.

As such, this opens the door to a new market: customized 3D glasses. Why use public, previously-used glasses that may not fit your head very well and will leave unsightly marks on the bridge of your nose? Why not purchase your own glasses for $10 to $15 that are comfortable and personalized in your favorite color or style! Who’s with me?
Posted by Omar at 6:45 AM